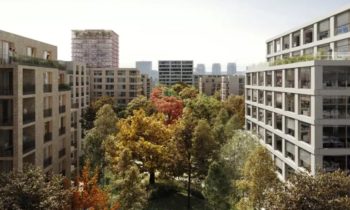 The total volume of real estate investments in Slovakia, despite the corona crisis in the first half of 2020, climbed to 432 million euros, dominated mainly by office and industrial real estate, followed by the retail segment. This follows from the latest data from the world real estate consulting company CBRE.

Investments in Slovak real estate by the end of June 2020 were redistributed among 10 transactions. The average volume of investments in each of these transactions is thus at the level of 43 million euros, while for the same period in 2019 it was on average 27 million euros. As usual, again, office and industrial properties dominated, followed by the retail segment.

Despite the situation associated with the spread of the coronavirus, the Slovak commercial real estate market showed strong performance in the first half of this year and the volume of transactions for this period exceeded all expectations. “This is mainly due to the fact that many transactions were started during the last year and were successfully concluded at the beginning of this year. After the outbreak of the coronavirus spread, investors’ interest in real estate projects was logically a little smaller, but it persists, “says Ľubor Procházka, Commercial Director of CBRE Slovakia. However, a preventive slowdown in construction processes during this period may delay the completion of some projects.

Retail and hospitality on the tail

Office and industrial real estate remain the most popular segments among investors, while the price level in these areas has remained at the same level, despite the current situation. Interest in the retail segment has slowed down in connection with the corona crisis. On the contrary, in the segment of industrial and logistics real estate, we feel higher demand from investors than the current market offers. Currently, the least attractive segment in the eyes of investors is the hotel industry.

He leads the Bratislava region

As usual, most of the transactions took place in the Bratislava region, of which the two largest were concluded in the first quarter of this year. Both of these transactions concerned the two most efficient segments. One of them was the sale of the Rosum office building by Penta Real Estate to the Austrian holding company European City Estates. The second major transaction was the sale of the Goodman logistics center in Senec to the British real estate fund Gazeley as part of the logistics portfolio within Central and Eastern Europe. Both of these transactions together reached a level of up to 147 million euros of the total volume of investments in the first half of 2020. The Bratislava region was the most active in Slovakia, with the sale of 7 assets with a total value of 229 million euros. In all cases, it was an area of ​​office real estate. In the area of ​​retail, only 1 transaction was recorded in the first half of this year, namely the sale of a regional shopping center for almost 40 million euros.

CBRE assumes that the so-called prime yields (yields from the highest quality buildings in top locations) of office and industrial real estate should not differ dramatically compared to last year. However, the negative impact on them can be felt in the area of ​​investment in retail and hotels.

Europe has seen a slight decline

In Europe, total real estate investment fell by 39% in the second quarter, compared to the same period last year. However, the level of investment for the entire first half of 2020 remained almost at the same level as last year. In continental Europe (excluding the United Kingdom and Ireland), investment increased by up to 6% in the first half of the year compared to the same period in 2019. Some regions were a little better at it. For example, Germany (20%), Austria (17%), the Netherlands (23%) and the Central and Eastern European region (23%) saw a slight decline.

As a result of the coronavirus spread across Europe, the largest decline in real estate transaction activity was recorded in May, mainly due to a number of government measures. There was a slight increase again in June, when restrictions began to be gradually relaxed. CBRE therefore expects that the volume of investments will continue to increase in line with the gradual recovery of the European economy. As investors sought the most stable source of income in this period of economic uncertainty, logistics and residential real estate were the best in each sector. However, the office real estate market remained the most sought-after asset class.

Investment activity in 2020 will grow

Experts from the real estate consulting company CBRE expect that investment activity this year could exceed, in the event of favorable market developments, the volume of investments from 2019, which climbed to 641 million euros. The reason is still sufficient l